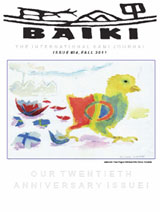 This past fall (2011) BÁIKI: The International Sami Journal, celebrated its twentieth anniversary. BÁIKI is the first North American periodical to focus on the Indigenous Sami culture of Norway, Sweden, Finland and the Russian Kola Peninsula. The Sami word "báiki" ["by-hee-kee"] means the sense of cultural identity ("the home that lives in the heart") that travels with nomads when they migrate. It is an appropriate name for the journal that triggered the reawakening of Sami consciousness among the descendants of Sami immigrants to North America.

GETTING CONNECTED AGAIN
The idea for a North American Sami newsletter was born during a month-long stay in Sápmi [Samiland] by Faith Fjeld, a Sami-American from San Francisco. On this trip, Fjeld attended the 1990 World Council of Indigenous People (WCIP) in Tromsø, Norway, where it became evident to her that Indigenous leaders from around the world respected the Sami as their relatives. Following the WCIP, her visits with Sami cultural activists throughout Sweden, Norway and Finland revealed a story of the rebirth of Sami consciousness in the Nordic countries - how it began and how it had manifested itself. The following Spring, inspired by her experience, Fjeld visited Norwegian-American Sami elders Rudy and Sally Johnson in Duluth, MN, and told them what she had learned on her trip. In conversations that included their son Arden, they agreed that a Sami publication in English would be a good way for North Americans to learn about Sami history and culture, trace family genealogies and define Sami identity.

A GRASSROOTS MOVEMENT WHOSE TIME HAD COME
The first issue of BÁIKI was printed in the fall of 1991. It was an 8-page newsletter sent to 100 friends and acquaintances. With Fjeld as editor, and contributors from both sides of the Atlantic, the issues featured Sami art, music, literature, poetry and environmental concerns. It quickly became the arena for poets, writers and artists from the US and Canada as well as from the Nordic countries to express the Sami experience. Within a year BÁIKI had grown to 20 pages with 450 enthusiastic and loyal subscribers. Today its circulation hovers around 1000 and the forthcoming "Twentieth Anniversary Issue" will have 32 pages. Financed in the beginning years through the sale of the family soybean farm in Iowa, BÁIKI is now supported by its subscribers, sponsors and dedicated volunteers. A list of grants that have helped the Báiki office survive gives evidence of the working relationships that have developed with other cultural and philanthropic organizations in the last ten years. The list includes the American Scandinavian Foundation, the Finlandia Foundation, the Norwegian American Cultural Foundation, The Sons of Norway Heritage Foundation, as well as The Needmor Fund and Lutheran Brotherhood.

A HISTORY LIKE THE AMERICAN INDIANS
Reader response has made it clear that many Norwegian, Swedish and Finnish Americans are part Sami. This heritage has at times been a source of family denial and even shame, attitudes that were the result of a 400 year effort by the church and state to de-humanize the Sami and trivialize their nature-based lifestyle and religion in order to colonize them and exploit their natural resources. Sami children were removed from their homes and teachings of their elders, isolated in boarding schools and forbidden to speak the Sami language. Letters to BÁIKI document the fact that during the immigration period, the stigma of being a "Lapp", a pejorative meaning "outcast", followed people with Sami ancestry to North America.

THE ALASKA REINDEER PROJECT
One group of Sami people came to North America under different circumstances. These were the reindeer herders who came to Alaska from Finnmark in the 1890s. Their story has triggered BÁIKI's recent series on the US Government's "Alaska Reindeer Project," which connected the Inuit, Yup'ik and Sami peoples. Since BÁIKI's appearance, "Sami Camps" have become popular attractions at Scandinavian and Finnish festivals across North America, for a grass roots community quickly formed among its readers. The Sami cultural information booths, craft exhibits, lavvus (Sami tents), and in some areas live reindeer, developed into "siidastallens" (gatherings of people and reindeer). These have been a way for those interested in Sami culture to network at larger events during the year. From the beginning, the Sami Camps and siidastallens attracted artists and other cultural representatives from Samiland and continue to do so.

BÁIKI'S NOMADIC HISTORY
BÁIKI has been as nomadic as the culture it represents. The first three issues were put together in an inner-city apartment in San Francisco. Then BÁIKI moved to a small cabin in the Northern Minnesota woods and the following year to Minneapolis, where the first "BÁIKI Office" was established as the North American Sami communications center with Sápmi. In 1995 the BÁIKI Office returned to the San Francisco Bay Area and moved into an office in Oakland's South and Meso-American Indian Information Center (SAIIC) and in 1997 the nonprofit Saami Báiki Foundation was accepted as Special Project by The Tides Center. A Sami research library and cultural archive has been organized by Nathan Muus as part of the BÁIKI Office. Muus, who is now the co-editor of BÁIKI, has collaborated with the Vesterheim Museum in Decorah, Iowa, to put together Sami arts and crafts exhibits both there, and in Washington, D.C. at Union Station. The BÁIKI Office's most recent migration took place in the fall of 2000, when it moved to an urban farm that was once an industrial site in West Oakland. A lavvu has been set up on the grounds for community gatherings.